How often do we think about death?

It’s thanks to our prefrontal lobes that us humans are able to realise, no matter what, death is coming. We hold the reasoning faculties to understand (beyond all doubt) we’re going to die.

Yet we’re also a generally positively-minded lot, spurred on by a fundamental fear we share with other organisms: the desire to keep ourselves alive, including a fight or flight response to the threat of death. This is why we run away from oncoming flesh-eating lions; it’s even why we apply for a new job, draw up health and safety regulations around the hazards of public cesspits, and attempt to find another person to live with, forever.

There’s a bit of a contradiction here, then. We’ve got both an unconscious, constant fear of death AND the means to cope with it. On the one hand we’ve got a desire to live fuelled by an inherent fear of death and, on the other, we have the knowledge that this desire will inevitably be put an end to. We know that what is present only as a fear, at the moment, will definitely occur. On top of all this, we don’t even know how it will feel to experience this event.

We’re left with going about our everyday lives with the ever-present potential to be confronted with the fact we’ll no longer exist someday. Even, or perhaps especially, when we’re waiting in the queue at the supermarket.  Why else would we bother with weddings? Or watch every Liverpool game?

Most reminders of death, then, aren’t momentous or earth-shattering occasions. When we are made to think consciously about death by, say, frustratingly well-meaning doctors, we just want it out of our minds. We’ll think, ‘not me’, or, ‘I’ll take up hiking and eat less bread’. We might even stop listening, mentally checking out of the conversation, and imagine ourselves sipping a cocktail on a faraway beach.

In these moments, while hearing something we don’t want to, we start to make proactive choices about surviving. This is in keeping with our instinct to put off death. In other words, we at least start thinking seriously about getting a few more minutes in on the treadmill.

But many of our encounters with death are fleeting and occur on the periphery of our attention. While we’re not confronted by endless subliminal messages of the word ‘death’ flashing up on our computer screen (at least, we’re not aware this is the case…), we are subjected to a lot of rolling news. We watch a lot of films and read books with action, torture and nail-biting duels. Our cities are built around and on top of graves and we’re prone to noticing any new wrinkle, grey hair or aching joint.

Our daily lives are seemingly built upon these small instances, from driving past the local cemetery on the way to work to momentary thoughts of ‘what’s the point?’ But unlike a trip to the doctor, they don’t move us to suddenly take up a diet of tantric yoga and smoothies.

Instead, thoughts of death become mixed up in our seemingly mundane choices. We might take up painting or stand-up comedy because of it, seek out new and fulfilling relationships with others (to varying degrees of success) and take insignificant risks, like professing our love for chess without embarrassment, all because of death. It could be said that it’s in these small instances we are seeking out meaning and affirming our life in the face of inevitable death.

While most of us are agreed that we’re going to die, those who spend a little more time than is thought usual are unfairly considered morbid or strange. But, really, how clear is the line between a simple reminder of death and consciously thinking about death? It seems that we’re in a constant interplay between thinking up ways to grapple with our fear of death and getting on with living. All the while, one thing’s for certain. Death. 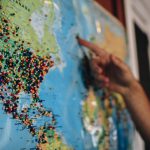 Next Story:
Death and grief in different cultures